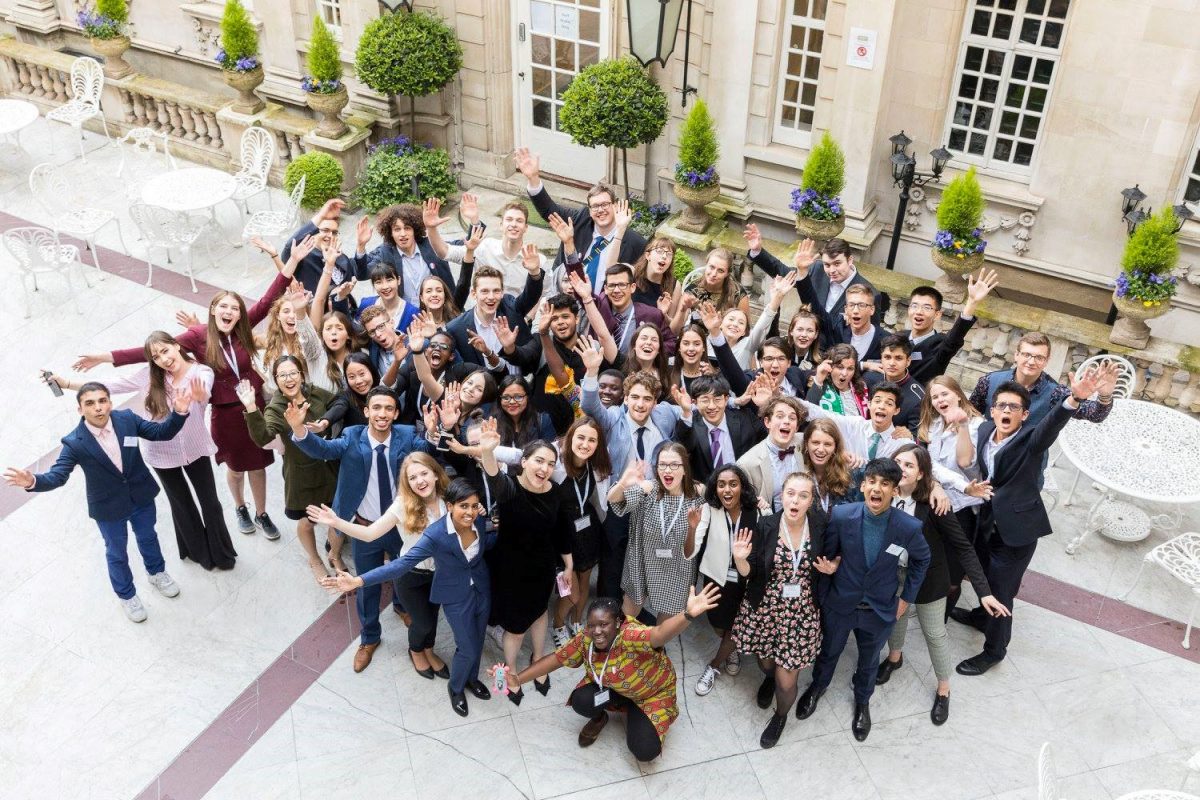 From the very beginning, competing in the Plain English Speaking Award was an opportunity for me to have my voice heard, to speak on something I was passionate about, and learn from those around me about the myriad of ways in which I could improve. Travelling to London for the 2018 International Public Speaking Competition was a valuable extension of the experiences I gained throughout the various stages of competing in Australia. I now had the chance to learn not only from my peers back home but also from talented young people hailing from nearly fifty different countries.

In the months leading up to my trip I of course worked whenever I could on my speeches, but also took some time to plan out a rough itinerary including places I wanted to visit during what would be my first trip to London. Trafalgar Square, Piccadilly Circus, and the London Eye were – although perhaps cliché – high on my list. As the day of my flight drew near and the nerves began climbing, a one-hour call with the 2017 winner of the competition, Luke Macaronas, provided a welcome escape and the chance to ask some fundamental questions. Luke was incredibly helpful and I’m still grateful to him for the honest advice he gave me (we actually recently touched base when I returned to Sydney, and I made sure to bring him a souvenir!).

I arrived in London with my parents and younger sister a few days before the competition was due to start – we wanted some time to shake off the jetlag and sight-see. We stayed in the Imperial Hotel, the designated accommodation for competitors, a lovely, classic location in the heart of Russell Square. Once the week of the competition kicked in, I moved into a room with the very sweet competitor from Malta, who coincidentally had wanted to travel to Australia for some time, giving us plenty to talk about.

Strangely enough, despite having been completely nervous to meet the other competitors, I found that we all melted into a comfortable friendship built on camaraderie and shared adventures. There was something truly surreal and wonderful in sharing a true British lunch of fish and chips (soaked in vinegar, naturally) with my new friends from the Philippines, Mexico, Ukraine, and Japan. With so many unfamiliar things to learn about their hometowns, it was incredible how much we had in common. Jazmin and I are both musical theatre fanatics and were both extremely excited to see The Lion King at a West End theatre with everyone. Marino and I both love art, and I advised her to visit the National Gallery in London, where I’d gone with my family earlier in the week. Manuel and I both do debating – an unsurprising commonality given our love of public speaking. Anastasiya takes incredible photographs, and I, though less talented in that realm, find enough enjoyment in looking at others’ pictures.

With these new friends and, of course, many others, I shared some memorable experiences throughout our few short days together in London. We walked along the River Thames to the Globe Theatre where it felt as though history and passion were tangibly woven into the thatched roof above us. We finally got to see The Lion King which we had been looking forward to for so long. We even had the incredibly honour of meeting Her Royal Highness Anne, the Princess Royal, who took the time to meet each of us individually and spoke to us all on the importance of public speaking and sharing one’s ideas in an articulate and thoughtful way. Of course, we also participated in plenty of public speaking workshops, sharing our speeches with one another and receiving feedback from other competitors to improve our content or delivery before the competition began. Some of the workshops may have appeared completely crazy to somebody watching on without any context; in one of the activities, for instance, we were challenged to deliver a minute of our speech using only the word “moo”, forcing us to convey as much meaning as possible through tone, expression, and body language. Although we were in fits of laughter by the end, the activity proved surprisingly useful; we realised how much thought needs to go into the details beyond oral delivery that can truly heighten the power and quality of a speech.

The end result of all of these experiences was that by the time day first day of heats came around, we barely even felt as though we were competing against each other. We weren’t ‘rivals’ – rather, one friend commented to me that she felt as though we were all just taking turns sharing something that mattered to us to an audience that shared and understood our passion. Because there were several rounds of heats going on at once, we weren’t allowed to clap or cheer audibly, but we were allowed to express our support with jazz hands – the equivalent of clapping in sign language. No matter whose turn it was to present, they would be greeted with an ocean of enthusiastic jazz hands in front of them, a warm welcome much needed to soothe the inevitable influx of butterflies in your stomach when you stand to speak. In the prepared heats we were asked to speak on the topic “great artists have no country”. It was absolutely amazing how our different backgrounds and experiences shaped completely unique interpretations of a single topic. I enjoyed listening to everyone else’s speeches so much that I genuinely felt I understood what my friend had meant earlier – we weren’t rivals, we were actually closer to being each other’s cheering squads.

Although I didn’t make the finals, some of my closest friends did, and as I watched the seven finalists shuffle anxiously through their palm cards in a motion all too familiar to the rest of us, I truly felt they wholly deserved to be there. That day I heard seven completely distinct speeches on the topic “the best way to predict the future is to invent it”. One finalist spoke about how written communication has evolved so dramatically over history, exploring the invention of things like paper and social media. My fellow musical theatre fanatic Jazmin spoke about the Philippine Diaspora, describing what it was like to see her aunt at the airport for an hour after years of being separated. One of my favourite speeches of the day was given by Kamel from Lebanon – he spoke about the gift of education, retelling the story of his father, who had grown up selling socks in a small southern Lebanese village, determined to one day send his children to school and thus inventing Kamel’s future to be different to his own. Throughout each speech, jazz hands littered the corner of the audience where the competitors were sitting together. And, at the end of each speech, no longer having to stay quiet, we stood and cheered as loudly as we could for each finalist, knowing exactly how hard they had worked to get there. Each finalist, in turn, looked over at the end of their speech and smiled in our direction – a trade of support and gratitude, built on friendship and pride.

There is truly very little I would change about this trip. Perhaps I wish I had been less nervous going into the competition, knowing now how friendly and supportive it turned out to be, and I hope future contestants will take this message to heart. They shouldn’t stress about planning out a strict tourist itinerary, either – the organisers set aside plenty of time for sight-seeing, guided by the competition mentors, who do a brilliant job herding huge groups of excited young adults around a busy city. All I would advise future competitors to do is go in with a positive mindset looking to have fun and learn from others; not just about public speaking, but about other countries, other cultures, other life experiences. I know a great deal more about these fifty countries than I did before I went to London, and I’m thankful to the other competitors for sharing their knowledge and ideas with me. I hope I was able to do the same.

On the day of the finals the emcee noted that they wished the UN was made up of diplomats as open-minded and friendly with one another as we were. We all laughed at the much-too-high praise, but I now see some truth in the words. Perhaps you can brush it aside as us being young and naïve, but it’s true that the people I met at this competition were some of the most respectful, tolerant, eloquent, and inspirational people I have ever spoken to. I was moved by their willingness to listen and determination to speak. I was surprised by their inquisitiveness and knowledge of the world. Most of all, I am made hopeful by their strong desire for peace and cooperation, and also the easy friendship that developed and remains between us. As I write this report my phone lights up with notifications from our group chat in which hot debate rages about the FIFA World Cup. On my desk is a small wooden elephant gifted to me by the competitor from India; on my fridge, countless magnets, snapshots of places I have never visited but feel like I almost have. It is thanks to this competition that I have gained not only fifty friends and a long list of new public speaking skills, but also a fresh desire to promote cross-cultural communication and individual activism through speech. I really can’t overstate how much I learned from my time in London – I only wish I could relive it. And although I sadly have one too few time machines to make that happen literally, I can confidently say I relive the things I learned from the competition every day, and I will continue to take with me what my friends from across the globe all taught me: to be proud of public speaking, to be hopeful for the future, and, most of all, to believe you have the capacity – and the skill – to change it for the be

Request to update details for