My name is Kate Blair-Hickman, and thanks to BBM Youth Support I have had the life changing opportunity to travel around the United Kingdom and Europe.

I explored the other side of the world’s agricultural systems, focusing on their dairy, sheep and beef industry, and saw and experienced just how important agriculture is to food in over 16 different countries.

Applying for this award was about expanding my knowledge of agriculture after two years of studying agriculture and wool classing at Tocal Agricultural College. I hoped to be able to gain a new perspective on the sheep (meat/wool/milk) and dairying industry within the UK as well as see what struggles and new opportunities UK farmers face in order to bring new solutions and ideas back to Australia’s next generation of farmers, in turn advancing and bettering the industry one person at a time.

Prior to leaving Australia I had conducted research on various events and places I could visit during my stay. Some key events included agricultural shows and seminars, as well as a placement on a Scottish sheep dairy.

On May 19th, I embarked on a journey that completely changed and revolutionised my thinking, in turn helped me develop some of my better traits and improve my lesser traits.

For the first month and a half of my travels I organised placement on a small sheep dairy and cheese production within its first year of sales, just outside of Cupar, in Fife Scotland. My mentor was Dr. Joan Brown, and her dairy consisted of eight milking ewes, six dry ewes (ewes not in milk), six hoggets/maidens (female sheep that have yet to lamb), one Ram/tup and 20 lambs (ranging from one month to six months). During my stay we had set up a rotational grazing system on her three hectares, put in new troughs to the lower paddock, weaned all the lambs, hoof trimmed all the sheep, set up and foot bathed all the sheep, took lambs to market and shore all the sheep. A week after my departure she got approval from the appropriate organisations to sell her cheese.

Throughout my stay I learnt a lot about working with different types of people, as well as teaching people about handling and caring for sheep. Some of my highlights included visiting the sale yards, the ‘Cupar highland Games’, seeing the sights of Edinburgh, learning about sheep dairying on a small scale as well as learning about how to make a soft sheep cheese first hand.

During my travels, I was able to go to a few great shows and expos, some of which included: ‘the royal highland show’ held just outside Edinburgh, Scotland, ‘the royal welsh show’ held in Builth wells, Wales, the ‘NSA’ show (National Sheep Association) and the ‘2018 Beef expo’ in Shrewsbury, England.

These events provided a great opportunity for me to get a taste for some of the unique breeds of sheep and cattle breed specifically the environmental conditions in which they lived. I also got a great insight into some of the major political, environment and production issues and views within the farming community. I sat in on seminars about the Implications of brexit, using a mixed farming system to boost profits, TB in cattle and how its spread through badgers, how to reduce antibiotic use on farm, new practices in worm control and much more. This gave me some great food for thought on how and why such issues have arisen and how they can and have been solved.

I went from milking sheep in Scotland to attending my Cousins wedding then attending the ‘Total Dairy Seminar’ in Startford-Upon-Avon. Over the week spent in Stratford-Upon-Avon, I helped set up the reception for the wedding, watched my cousin get married, met family I didn’t even know existed, spent 2 days listening to industry leaders and innovative farmers share knowledge of all things dairy. The underlying tone to the seminar was the importance of young stock health and management. I learnt a lot about housing of stock over winter, care and management of calves, different ways to minimise antibiotic use and how to feed and care for dry and late staged pregnant cows. The seminar was a great introduction into the more technical side of dairy management, and gave me a greater understanding on the problems and new innovations farmers worldwide are facing.

A VISIT FROM HOME

An entertaining break in the middle of July was a visit from my father and two younger siblings. We saw some of England’s attractions such as the Alnwick castle, bath and Stonehenge.

A highlight of this trip was defiantly attending the English National Sheep Dog Trial, and the next 2 jam-packed weeks that occurred through it. Over the 3 day trial, 50 of England’s best sheep dogs battled it out for one of 5 spots on the English team. I was able to learn and experience bucket loads by talking to people from across the country, finding out both how the trial works and why they loved it. On the final day of the trial, I met Wendy, an agricultural reporter, who took me in for two days. It was here that I got to see how agricultural reporting works and how her dog (a border collie service dog) made such a big impact on people with alzheimers in a nursing home. We then travelled down to Lancaster where I met Brenda Heilliwell, who over the next 10 days taught me heaps about the fundamentals of training sheep dogs, as well as introducing me to some other brilliant people alongside taking me to two of her trials. It was a great opportunity to network and learn from such a great group of people.

When I first planned out my itinerary, I played with the idea of going to Europe. Then I looked at my savings and award money, shook my head and laughed. After 2 months, the only Europe exploration was going to be flying over parts of it on my way home. However, thanks to my parents help and encouragement, an idea became a reality and before I knew it is on a bus, exploring 13 countries and 20 cities over 26 jam-packed days with 30 other 18-35 year old. Not only was this a great way to see iconic tourist attractions and a variety of cropping and grazing layouts (from a bus window) but it was also an insightful look into Europe’s history. Europe’s history has a large emphasis on World War II including places like the Auschwitz concentration camp for Jews and political prisoners, as well as some of the Jewish quarters all the way to the Berlin wall. However, as hard as it was to go to places of such human destruction, it gave me so much appreciation for the country, life and opportunities I’ve been given. 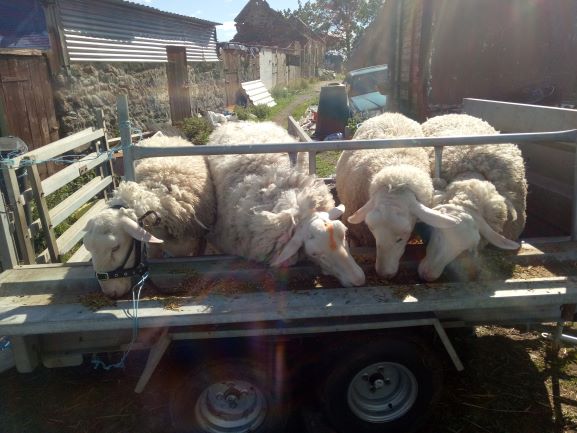 The last month of my trip I was lucky enough to be able to stay at my great uncle and aunt, Kevin and Dianna’s, in Normandy. It gave me time to reflect over the past 3 months of travelling, as well as letting me see first-hand the importance of food and community to the French. I was able to go to multiple markets, and see different types of produce sold that you would never see in Australian markets. I was also able to look around three local farms. I visited a sheep dairy, goat dairy and beef farm. Although, what stood out to me the most was the emphasis on using as much from the farm as possible and selling to the local community instead of out sourcing to the wider area. For example, the goat dairy I visited sold cheese and soap from his farm to local restaurants and the local version of IGA. Something that I found very interesting was visiting a calf sale, of mainly bobby calves, left over from the dairy industry. In France bobby calves seem like much less of a bi-product, selling from between £120-£300 Euros (195-490 Australian dollars) which is shockingly different to the $50-$100 Australian farmers might get for the same month old calf. It was amazing to see just how much more French value food and all parts of the animal in their cuisine. It’s not often in Australia that you would see duck liver or cows tongue on a top restaurants menu.

Reflecting on my travels now, I realise one of my biggest costs was travel between places. I’ve found out the UK public transport system is not exactly budget friendly. Also, if you’re 18 years old no rental companies will insure you even if you buy a car.

Here are my travel tips: plan ahead – the companies that run the ticket system happily quadruple the cost of a ticket if you buy it on the day of travel. TRAINline is a wonderful app for train booking however bus companies generally have individual sites. If your 18-25 you can get a bus or train discount card for 30% off (it paid itself off on my first trip). For touristy things and even entertainment or shows, there was often a student discount so take your card or apply for an international one that gets delivered in the mail. Like public transport, the price for booking hostels and hotels go up daily, hostels shouldn’t cost more than £25 per night in a shared room (just make sure to have a padlock).

As far as where to go and what to do, some of my best experiences came from networking and talking to like-minded people. The internet is great but talking to other people is so much more rewarding long term. If people see you’re interested and keen on learning they’re generally more than happy to help you out.

In reflection of this trip, I’ve realised first and foremost the importance of BBM Youth Support, friends and family that supported me, mentored me, and allowed me to go on a trip of a lifetime. This trip has given me confidence in myself, adapted my world view, broadened my horizons and given me invaluable knowledge, experiences and life skills. I have so many new and borrowed ideas that keep developing and running through my mind which keep asking me the question, what next?

Request to update details for